skip to main | skip to sidebar

I took a Character design class last semester and I really enjoyed it. Our teacher was Todd Harris. The class really focused a lot on the story behind the characters. 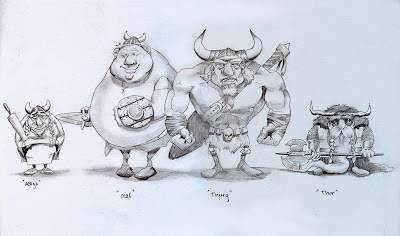 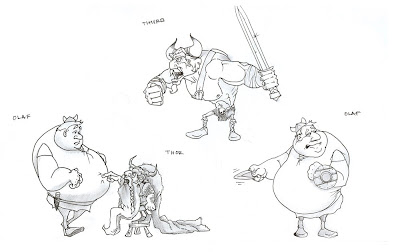 This was our first assignment. We were asked to come up with our own story and provide the characters. The basic idea of my story was about a viking family with a confrontation between the two brothers. The oldest one being the heir to the throne by birthright, and the second wanting him out of the way because he feels he is inadequate to rule the people. 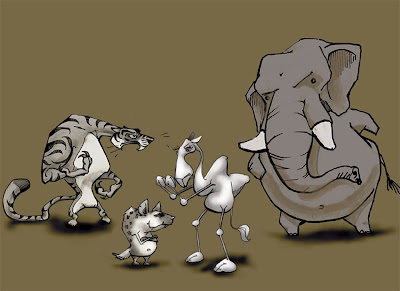 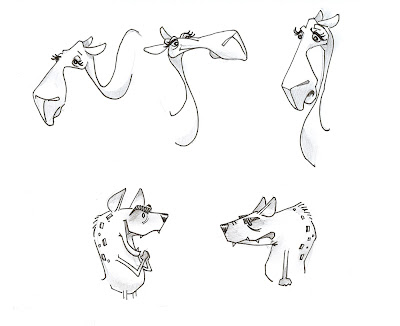 These were some characters for a story about post-apocalyptic animal superheroes (kind of rolls right off the tongue doesn't it). I really like drawing animals so I thought this one was easy to get into. 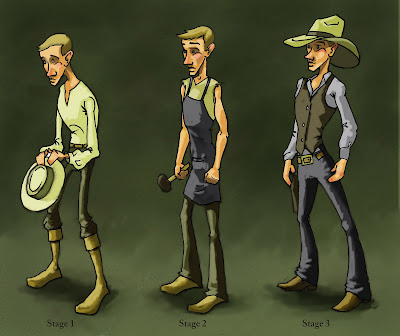 This was our Final. We got to choose from The Wizard of Oz, Little Red Riding Hood, or any other classic and put a twist on it. Then we needed to show the main characters progression as they went through the story. I chose The Wizard of Oz and I set it in The old west. My main character gets separated from his family, and has very little self confidence. He is befriended by three different outcasts that help him to grow in some way. In the end he is reunited with his family and has to face his fears. 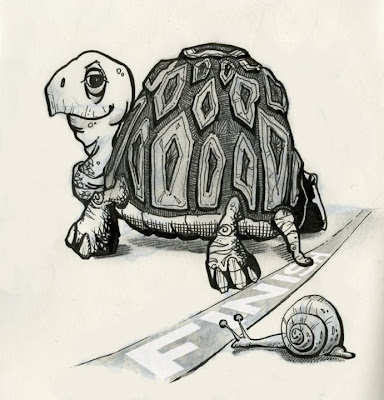 On the way to class one day I was thinking of the story of the Tortoise and the Hare. I thought it would be fun to replace the hare with a snail. It doesn't mean the tortoise was any less persistent, even if he does finally have the advantage.
Posted by Matt Loveridge at 1:24 PM

Matt, how would you like to work together on a project with a kindred spirit...?

Before you respond, let me explain...!

My name is Robert Shunn... I live in American Fork Utah, My brother went to BYU (I just root for them)... and tonight I was cruising the internet looking for a photo (to go on my blog) along with my poem about a tortoise, a hare and of all things a snail...!

It is called "Not So Fast"... a play on the story of the tortoise and the hare, and the race that almost was involving the snail... with a twist of course.

To further explain, I write what I call poemetries... a combination of poems, poetry, whimsy, new twist on old topics, and I also re-write childrens stories in poetic rhyming verse form.

I have explored the realms of what reeally happened to Humpty Dumpty (He did not fall, he was not pushed, he was dumped by Snow White) and his broken heart...

I have several that many have told me would be a perfect childrens book... except I am not an illustrator... BUT YOU ARE!

Any interest in doing a project with a guy that you do not know (I have references), who has 5 kids and a beautiful wife that I love dearly also...

My wife has a blog at
Simplyafamily.blogspot.com

Check them out... you will see that we are almost normal people. I have just started posting some of my stuff in random fashion... If you are interested you can call me at 756-2217 as long as you are not a nut or whack job.

Sincerely like what I saw of your work... I have no grand illusions about becoming rich and famous, but it would be nice to see something that I wrote find its way into a book that a kid could hold and enjoy.

Matt Loveridge
Pleasant Grove, UT, United States
Matt graduated from Brigham Young University with a bachelors in Illustration. Matt lives in the mountains of Utah with his wife and kids and their dog "blue".

for commisions, school visits, or a print of one of my paintings, contact me at

I look forward to hearing from you.